Bimbia is a suburb of Limbe in the South Western Region of Cameroon. In Bimbia lies one of the sites in the African continent, where our Ancestors were enslaved and traded. 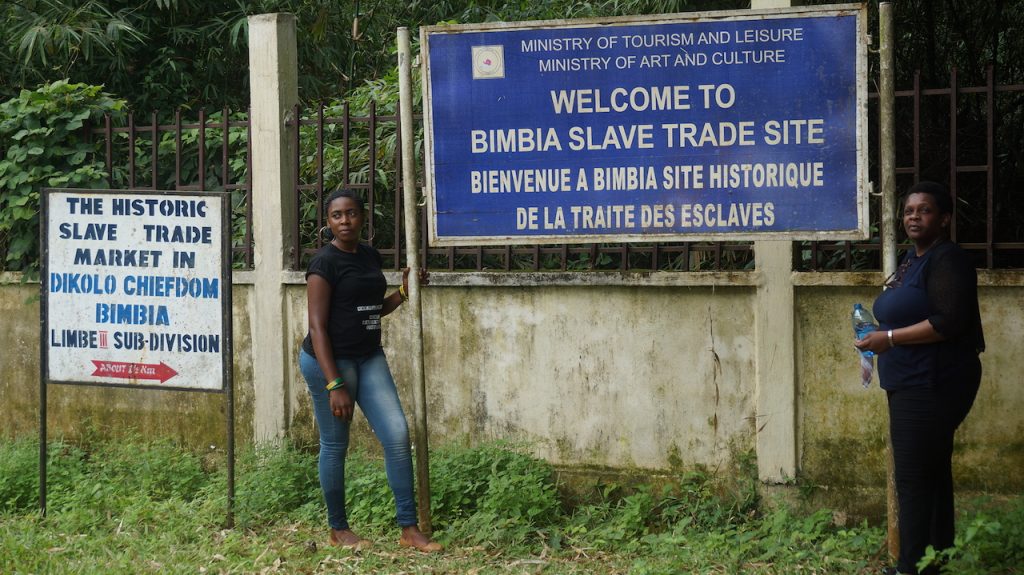 According to African historical facts, it was the focal point of marketing and transporting enslaved men, women and even children of Africa to continental Europe and the Americas. It is a place that tells the story of how Africans were rudely and inhumanely tortured by the Whiteman, separated from their homeland,families,and above all detached from their roots. They lost their Spirit of oneness, unity,identity, bonding and other things that defined them as Africans.

THE JOURNEY TO BIMBIA

The 12km road to Bimbia is rugged and pot holed and in dire need of construction. It is hard to imagine the small vehicles embarking on this uphill journey and survive it. Definitely in the rainy season, this is a no go area.

P.E.A.C.E,a Pan-African network and platform Organization in Limbe, organized the journey to Bimbia on Saturday 17.09.2016 with two experienced personnel that guided the group through the entire journey. Halfway to the journey there on top of a hill stands a statue of a man holding out hands in a surrendering gesture. The guide informed us however that the statue signifies freedom as the chains on both ankles and on the hands are broken and separated.

The journey up to the site is a picturesque, filled with the progressive Limbe views of the residences, the BIR army barracks, the natural waters surrounding the entire area, the hills and valleys, the evergreen plants, the view of the Buea mountain and much more.  It is a breathtaking sightseeing adventure that releases some of the anxieties and tension of the expectations in the Bimbia enslaved“trade site.”

The entrance to the Bimbia site is surrounded by an opaque black iron gate, around it is a see through fence where one can get a glimpse to the inside. It is approximately 2km inside down to the infamous waters/shores that carried off the fateful ships. 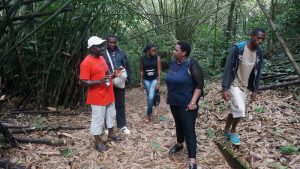 On entering the premises one feels the legs weakening, the hairs on the scalp stand in utter shock, the skin fills with goose pumps, the feel of the entire complex is one disturbing phenomenon that jerks one´s back with a shiver down the spine.

The journey down to the shores is surrounded by various structures signifying numerous scenarios. There are pillars that have deteriorated over more than a century, showing stones of concrete cement and heavy blocks of a once upon a time solid structure.

On entry, the first block that welcomes a visitor is about 5m wide, 1m high and a foot in width. It has chains cemented in its walls, the chains are situated a foot from the ground where it is imagined that they were the ankles of the enslaved chained on to them. The chains are about a foot apart and on top of the blocking the middle is a long narrow furrow for water to drink. This indentation was definitely for our Ancestors as they were treated like animals. There is no need here for ex cogitation or to beat about the bush, what happened here a hundred and fifty years ago is a spine-shattering incident. 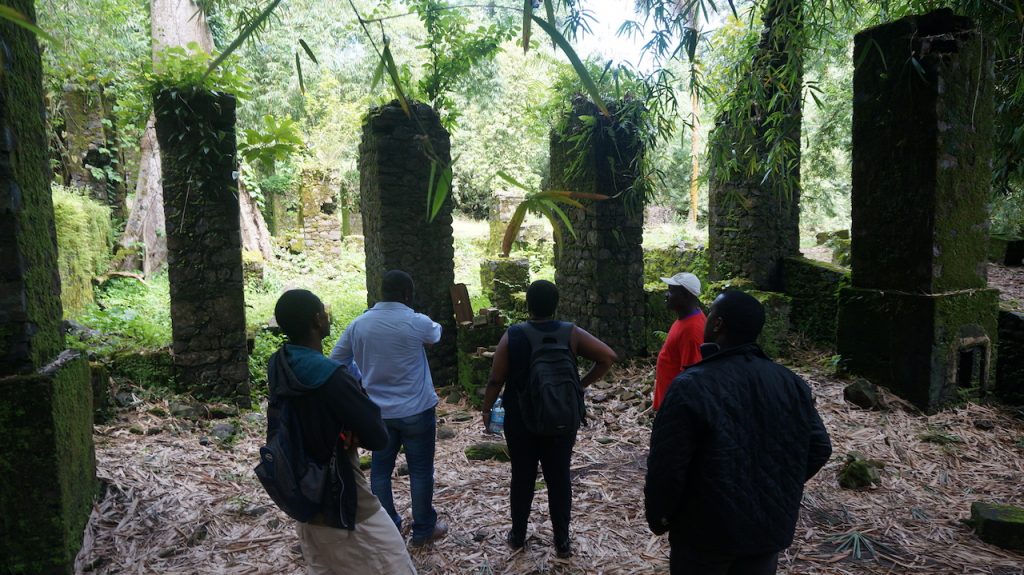 The enslaved were not only collected from Bimbia, Limbe or even just around the Cameroonian territories rather also from other regions far and wide in the African countries. They were forced to trek hundreds of miles while chained and beaten along the way to Bimbia. On arrival, those that survived the journeys were immediately categorized and divided into groups as to the wishes of the slave masters. The sick were normally quarantined or simply thrown down the water to drown.

There are visible partitioned walls on the premises and small huts, with just one chair inside that signifies where the chief sat and dictated where the enslaved should be distributed. There are concrete walls standing on their own where they were chained and tortured for resisting the atrocities.

The site is deteriorating; there is no restoration and lack of maintenance as the buildings are now remnants of what was so long ago. The foundation in the ground was the strongest and still is, however the walls and the roofs are since gone down.

The guide informed us that, our Ancestors were provoked by the invasion on the continent, and that these white people conned their way inside the continent claiming peace tidings and started negotiating the exchange of goods for the African prisoners to serve their sentences under their (white people) supervision engaging them in manual labor while teaching them their languages alongside. By the time the chiefs realized that they were duped their prisoners are never to return, it was too late for them to retract their steps and to combat it out with just the bows and arrows the Africans had at the time against the firearms of the Whiteman was next to impossible. The various shades of the sheepskin that were presented to the African chiefs transformed into the horrific beasts that even turned against the chiefs themselves and reduced them to slavery. 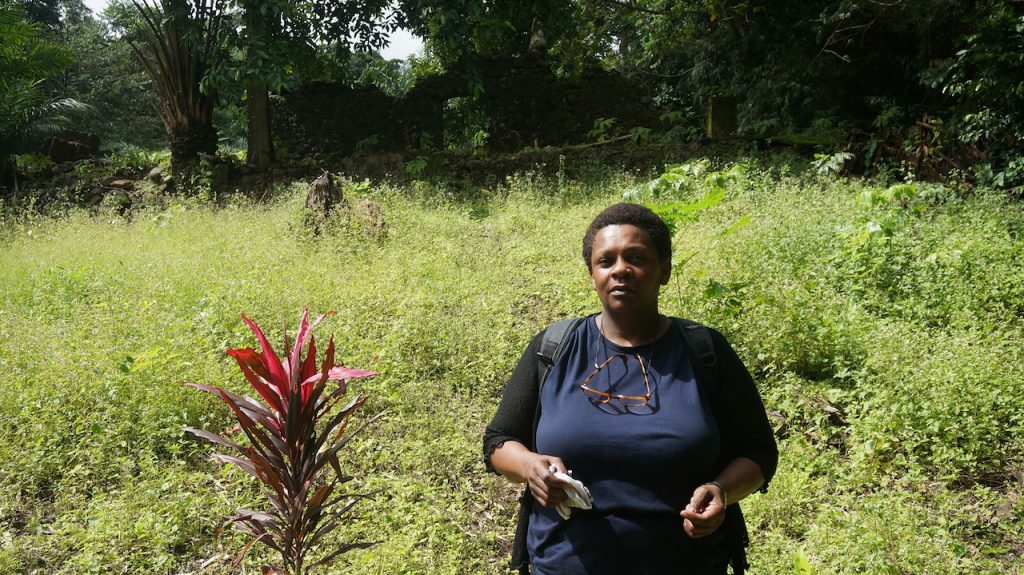 There is a far side within the complex that is no longer visible, blocked by the enormous bamboo trees that are scattered all over the place. The bamboo trees, it was recounted were said to have been imported from Asia by the Whiteman. There are even stories that white people would plant these bamboos through those Ancestors that had gone against their wishes. It is a fact that a bamboo tree would sprout no matter the conditions of the area. The slave riders would plant the tree under the foot of an enslaved and it would push out of the earth right through the foot and into the leg. 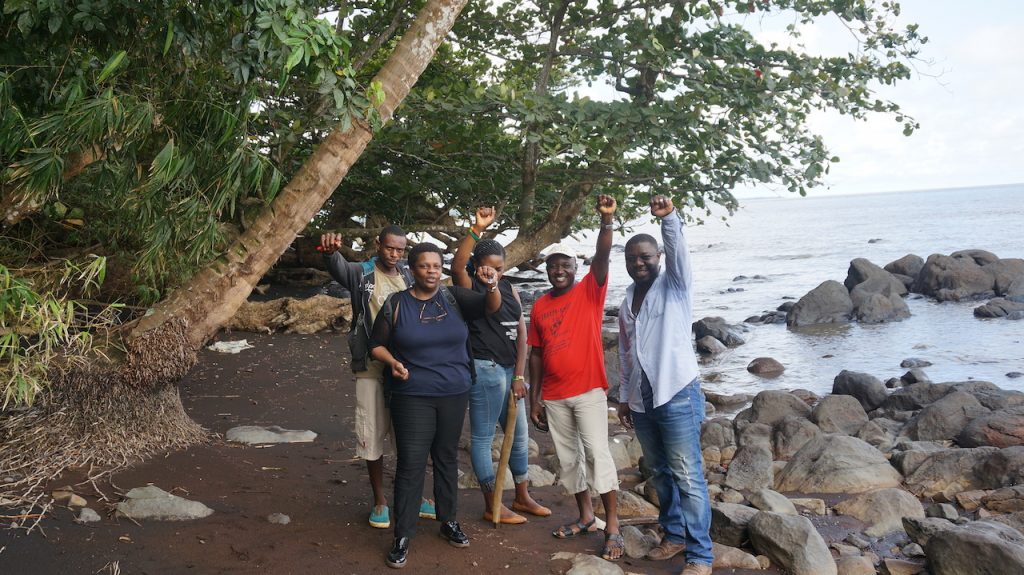 Such scenarios would turn any human momentarily disoriented and the slave riders would engage this method to break the will of the slaves into talking or giving away their counterparts.

The most shattering part along the tour of the site is the last small outlet that faces the ocean, it is the “point of no return”where our Ancestors last stepped off their beloved motherland to board the ship towards hell. The name of this outlet intensifies the pains of what happened many centuries ago as the structure remains intact facing the ocean as if waiting for any action in contrast as in the return of the loved ones.