Home / Campaign / info / News / web / Statement of Support and Solidarity with the Refugees and The VOICE Refugee Forum, in the Gotha demonstration against the deportation of 30.000 Africans (Nigerians) from Germany.

PEACE (Peer Exchange of African Communities for Empowerment) Statement of Support and Solidarity with the Refugees and The VOICE Refugee Forum, in the Gotha demonstration against the deportation of 30.000 Africans (Nigerians) from Germany.

The PEACE Int. Network, also as part of the African / Black Community Network in Germany, stand in solidarity with and support the “Refugee Black Box” campaign against the deportation of 30.000 Africans (Nigerians) from Germany.

We stand against all forms of human rights abuses especially the deportation and the persecution of African refugees and migrants in Germany and elsewhere. We stand with the refugees in Gotha and The VOICE Refugee Forum Germany, who are organizing a demonstration on the 10th of August in Gotha against the deportation of 30.000 Africans (Nigerians) from Germany. Deportation is a crime

To us, this “Refugee Black Box” campaign is not just an announcement but also a call to action, solidarity and unity. It is about solidarity against injustice. If we want justice, we have to fight for it and the first step is by building our communities, our African/Black Communities. There can be no real justice without a strong community. A weak Community will never get justice because our oppressors are not stupid. Their policies are the instruments of our destruction. If you want justice, build your community.

We are dying in the Mediterranean Sea like sea birds caught in a pool of spilled crude oil from exploiting tankers. We are trapped in ships as if we are remaking the journey of the middle passage. This time, it is being said that it’s our decision, not forgetting the exploitation and plunder of our resources by the Countries of the Northern Hemisphere through neo-colonial methods.

Before, the world killed us while we were watching but now, we are killing ourselves while the world is watching. For how long shall this go? Rise up Africa, arise Africans and reclaim your position and rightful status on this planet. Playing small or modest will not give you justice. What was taken violently from us can only be taken back not through rhetoric and declarations but dedication, courage and the vocation to fight for our Motherland Africa, our communities and ourselves, by any means possible.

Let us unite to end the deportation and social exclusion of refugees in Germany and elsewhere! 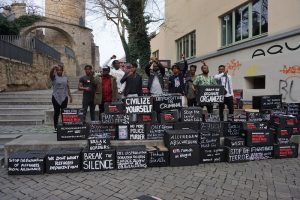 In these desperate times of aggressive attacks on asylum rights with the aim of its total abolition and complemented by the increased right wing terror, violence and mass mobilizations against refugees in Germany, we want to offer a common opposition and a platform of solidarity against these crimes by the German state. It is not enough to engage in these prevalent superficial and unreflective “Refugees Welcome” initiatives where most ‘benevolent’ participants expect the ‘poor refugees’ to be grateful for being camped in tents and sport halls while being bombarded with second hand clothes and shoes (http://thevoiceforum.org/node/4210).

Today, we may be fighting a different type of deportation but the rationales behind this murderous policy is the same, the extermination, subjugation and control of people deemed subaltern.

There are individual and mass deportations by the European FRONTEX, with Germany playing a leading and conspicuous role, both in individual and mass deportations. The mass deportations have been an instrument to sustains imperialism, global capitalism, and global apartheid and has been taking more and more racialized and militarized dimension. Citizens of so-called developing countries especially in Africa and now in war-torn Middle East Asia are more and more being targeted by powerful western countries, including Germany. This could only be made possible through coercive state apparatus, a vulnerable labor force and a global market for cheap goods and services. While on the one hand, the deporter most often than not has a history of being the oppressor, the deportee has almost always a history of persecution. 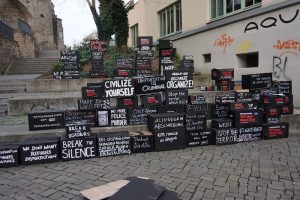 That is why; the fight to stop deportation and the anti-deportation struggles should be a fight that should go beyond the justification against persecution in our home countries or for integrationist and assimilative reasons. It should be seen as a fight against imperialism, capitalism, racism, slavery and colonialism. It is a fight against impunity and for a different world order. If we succeed in stopping deportations, it will be a revolution.

The deportation culture of Germany did not start today but it should be stopped today. It is a part of its colonial legacy and an injustice that should not go unpunished.

Arise brave People everywhere you are! Let us hold hands together and defend our integrity, for only with Unity can we stand and over-power our enemies against colonial injustice.

The revolution is near!!

Purpose: Donate or become a supporting member of PEACE e.V.