For the 16th consecutive year, the “Committee for an African Monument in Berlin” (KADIB), represented by the “African / Black Community” (ABC), invites the general public to join us for our annual Memorial March in commemoration of the African / Black (S)heroes / Heroines and victims of the Maafa. “Maafa” (Kiswaheli) means “The Great Destruction” in Africa: Enslavement, Colonialism and Genocides, Neo-Colonialism and Ecocides, Nazism and Racism. 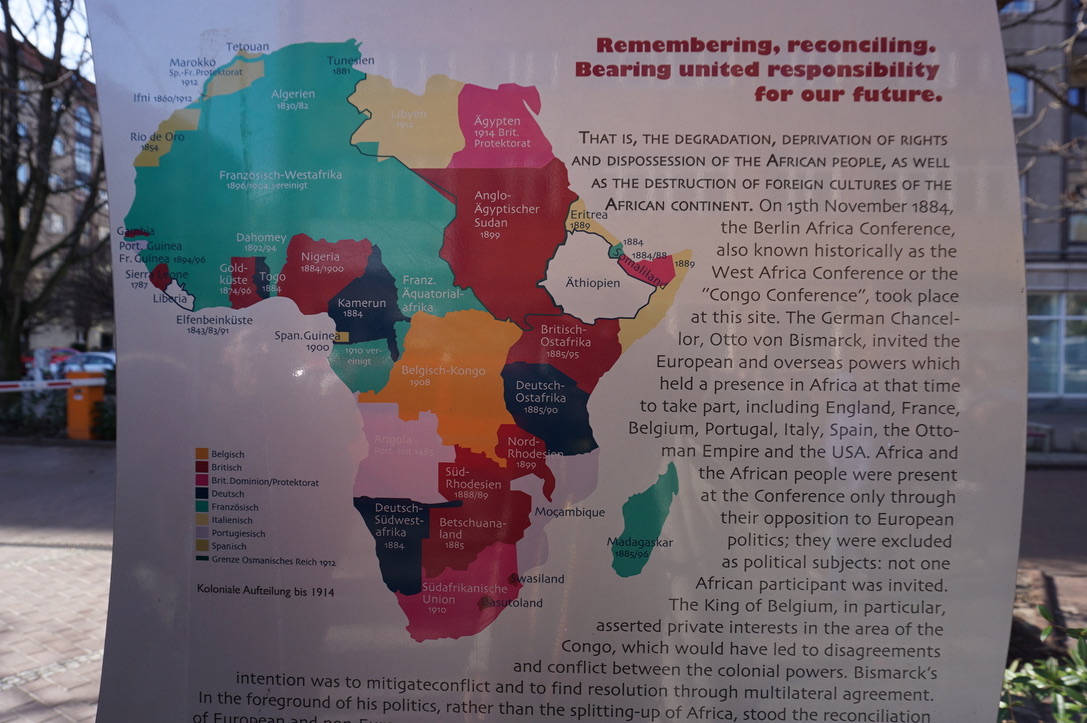 As every year, the Memorial March begins here with wreath-laying ceremony and speeches. At the invitation of German Chancellor Otto von Bismarck, the infamous “Berlin Africa Conference” began on 15 November, 1884 in Berlin (Reichskanzlerpalais, Wilhelm-Strasse 77) and ended there on 26 February, 1885. Berlin, as the capital of Germany, was therefore purposely chosen as the location for the Memorial March, because of its colonial legacies, but also because of its involvement in Africa’s current plights.
The Memorial March ends with a rally at the Humboldt Forum.

We call on the general public, especially the African / Black / “BIPoC” Communities, to participate in the Memorial March, to mobilise for it, to support our cause and demands as well as to intensify pressure on the German Federal Government to at least expeditiously implement measures agreed upon in the coalition contract of the new German Federal Government dealing on Germany’s colonial legacy (see below).
The motto of this year’s Memorial March is “United We Rise! “, and thus, our hashtag “#UnitedWeRise”.

The Memorial March will definitely take place as an outdoor physical activity. Due to the Corona pandemic, all planned supporting events have already been cancelled. All Corona-related safety and hygiene regulations will be observed during the Memorial March!
We would be very pleased if you could announce and report on this historically important event (pre-event and post-event reporting). You are of course also cordially invited to the Memorial March. In addition, we are available for interviews as well as for general information on the Memorial March.

Also this year, we are marching to honour and pay tribute to our heroic Freedom Fighters who fought against the Maafa as well as the victims of the Maafa. We emphatically declare our decades-old demand: the erection of a central monument in Berlin to serve as a place for commemoration and extracurricular learning about colonialism and neo-colonialism. We are also marching to protest against colonial continuities, against all facets and levels of racism, but also against Europe’s racist and deadly migration policy towards Africa.

The initiator of the Committee for an African Monument in Berlin (KADIB), Prof. Kapet de Bana† (RIP), had constantly reiterated:
“While we march, remains of our Ancestors and artefacts that have preserved our cultures and cultural treasures are still been displayed in German / European museums. We demand the repatriation of everything stolen by Germany from Africa.” Prof. Kapet de Bana also persistently reminded the world of the right and duty to remember.

The campaigning organisations and initiatives have long demanded (also this year) not only the erection of a central Monument as a place for commemoration and extracurricular learning about colonialism and neo-colonialism, they are also demanding a comprehensive reappraisal of German colonial history and continuities as well as an earnest approach of confronting institutional and structural racism, as also stated in the Agenda 2025 of the Federal Conference of Migrant Organisations (BKMO) and as declared by UN’s International Decade for People of African Descent (2015-2024).

Colonial legacy remains topical in Germany, critical in its relation to racism, explosive in terms of foreign policy and, above all, existentially important for those affected in Africa and other colonised regions of the so-called Global South. Therefore, we are pleased to note that parts of our demands have been included in the coalition contract of the new German Federal Government, which states:

“In order to advance the reappraisal of German colonial legacy, we also support the digitisation and Provenance Research of colonially strained collections and make them accessible on platforms. In dialogue with the societies of origin, we strive for restitution and deeper interdepartmental international cooperation. In particular, we support the return of objects from a colonial context. We are also developing a concept for a place for commemoration and extracurricular learning about colonialism.”
[Coalition Contract between the Social Democratic Party (SPD), the Green Party and the Free Democratic Party (FDP), p. 125, Chapter VI, section “Colonial Legacy”]

We also welcome the announcement by the German Federal Government about the long-overdue return of looted (“sacred”) so-called Benin artefacts to Nigeria. These developments must be seen as “only a beginning” and we recognise them as partial victory which is a product of our vigorous and relentless decade-long anti-colonial / anti-racist resistance struggles in this country but also in Motherland Africa at large. Nevertheless, many of our sacred artefacts, treasures, statues and works of art that exhibit African traditional religious and belief systems, such as the Ngonso sculpture representing the origin and culture of the Nso People (Cameroon), are still stashed away in basements in Berlin and elsewhere in Germany.

Nevertheless, our ultimate goal remains unequivocal, which is the complete and unconditional decolonisation of all neo-colonial and imperial power constructs and systems in Motherland Africa.

Organiser: “Committee for an African Monument in Berlin” (KADiB), represented by the network “African / Black Community” (ABC). The following organisations and initiatives are considered here as co-organizers / supporters: