13th Memorial March in Berlin – Our Maafa, the only Human Catastrophe still to be acknowledged and reparations paid 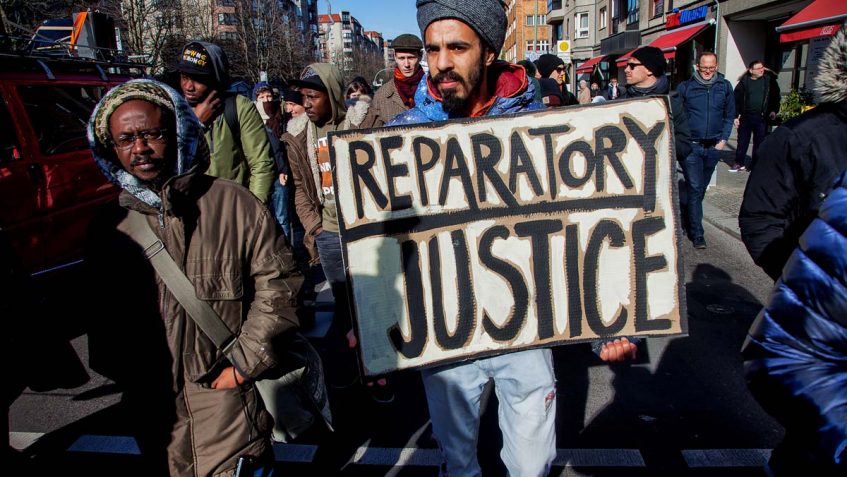 BERLIN: With the support of more than 30 networks of the African / Black Communities in Germany, the “13th commemoration March in memory of the African/Black victims of enslavement, slave trade, colonialism and racist violence” was organised and executed. And with the participation of about 200 people this year (23rd February 2019), our CEO of PEACE Bro. Dr. Mbolo M. Yufanyi was first given the honour together with other colleagues by the Committee for an African Monument in Berlin (KADIB), to lay down a wreath at the memorial tablet at the beginning at Wilhelmstraße 92 in Berlin-Mitte. At the end of the March, he recited an ancestral prayer and concluded with a firing and inspiration speech, calling for our unity, strategic networking and Community organisation. 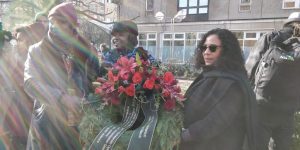 The Committee for an African Monument in Berlin (KADIB) through the African / Black Community (ABC) organised the 13th commemoration march in memory of the African/Black victims of enslavement, trade in slaves, colonialism and racist violence on 23.02.2019 from 11:00 a.m. to 15:00. The meeting point was Wilhelmstraße 92 in Berlin-Mitte, just like every year.

The commemorative march was created in order to emphasize the demand for the recognition of the crimes committed against African/Black people and to honor their resistance. For this reason, the United Nations has proclaimed the International Decade for People of African Descent under the motto “Recognition, Justice, Development” (2015-2024). 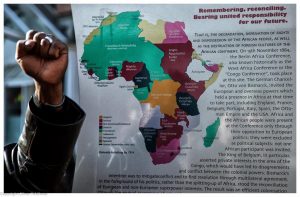 With reference to the end of the Berlin Africa Conference (26.02.1885), the last Saturday of February is chosen every year as the date for the annual commemoration march. At this conference the colonial-imperialist powers divided the African continent and its people among themselves under exclusion and without the consultation of Africans.

What this meant for many of our Ancestors / Ancestresses and the rest of the world, was the begin of an unscrupulous oppression, exploitation, enslavement, forced labour, torture, rape, art theft and cultural destruction of our continent. In addition to direct geographically limited “genocides”, a crime against humanity has been committed on the continent and in the diaspora on an unprecedented scale. In the course of the colonization of Africa, more than 30 million people were victims of these crimes. 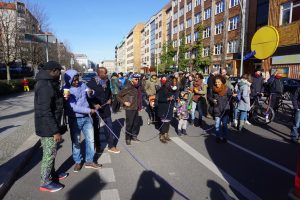 In 1904-08 the Germans committed the first genocide of the 20th century against the Ovaherero and Nama. 50-80% of their children, women and men were murdered and their entire country illegally occupied. The simultaneous war crimes of the imperial “Schutztruppe” in the East African Maji-Maji War cost the lives of at least 300,000 people as a result of the German scorched earth policy.

Under Lettow-Vorbeck, the commander of the imperial “Schutztruppe” in the First World War, hundreds of thousands of East Africans died again. After 1933, numerous Africans were forcibly sterilized by the National Socialists (the Nazi), executed as prisoners of war or murdered in German concentration camps. Tens of thousands of people of African origin fought on the “Allies’” side and in the resistance and sacrificed their lives for the liberation of Europe from the Nazi regime. 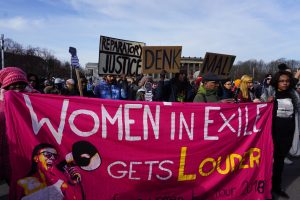 Nevertheless, there is still no central memorial in the Federal Republic of Germany to honour the African/Black victims of the Maafa (Kiswaheli for “great destruction”). Until date, their resistance against colonialism and racism is still not appreciated or recognised by the representatives of the federal and state governments.

On the contrary, the German Federal government concludes neo-colonial free trade agreements, creates dependencies on European development aid, exports weapons and externalises its borders, while Africans are driven to their deaths in the Mediterranean by the EU’s intentional refusal to provide maritime assistance to the drowning. If they do reach the EU, they must fear deportation, anti-Black institutionalism and everyday racism. 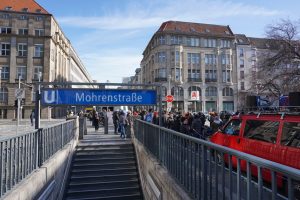 In addition, numerous streets throughout Germany still bear the names of colonial criminals and profiteers of enslavement. Even against the declared will of the African / Black Communities, the city of Berlin still clings to the racist name “Mohrenstrasse” today. This is an ongoing affront, as the name goes back to Brandenburg-Prussia’s trade in slaves and the deportation of underage Africans to Berlin. In 2019, the Federal Government is also planning to open the Humboldt Forum in Berlin Castle, where valuable cultural treasures that were stolen from Africa by colonial criminals will be presented.

Notwithstanding its international commitments of Durban 2001 and the current UN Decade for People of African Descent (2015-24), the Germany has never apologised to or asked for forgiveness from the descendants of the colonised for the crimes committed against our Ancestors / Ancestresses.

The Federal Government signed the Declaration of the World Conference against Racism, Racial Discrimination, Xenophobia and Related Intolerance held in Durban from 31 August to 7 September 2001. As a contribution to combating racism against Black people, we call in the spirit of this declaration for a comprehensive reappraisal of German colonial history and its continuity with the decisive participation of representatives of the African/Black communities.

We call on all activists of the ABC to start already the mobilisation of the 14th Memorial March, which is going to be on the 29th February 2020. This is a community event and should be seen as a yearly Community mobilisation for to demand the Reparations and a stop to all abuses on Black people in Germany and Europe in general. 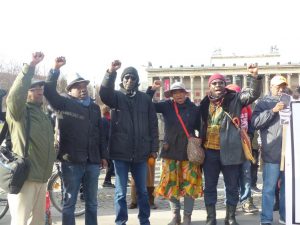 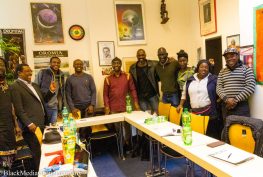 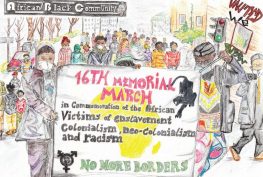